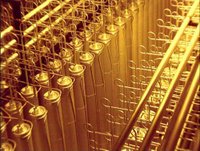 The European consortium parent Urenco receieved a license on June 23, 2006 to build a $1.5 billion uranium enrichment plant near Eunice, New Mexico. The new plant will use centrifuge technology and is expected to begin operating in 2008. Urenco is owned by British Nuclear Fuels Ltd, the Dutch government, several German utilities and Louisiana Energy Services is the American subsidiary.

U.S. Enrichment Corporation (USEC) is the only other company in the U.S. enriching uranium. It has a gas diffusion plant in Paducah, Kentucky and is planning a new centrifuge facility in Portsmouth, Ohio. AAEA supported the New Mexico project and supports USEC's plans to build a new facility.
Posted by Norris McDonald at 12:34 PM