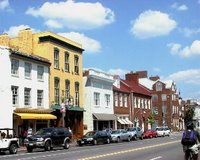 The black criminals in DC are out of control. There are 96 murders so far this year compared to 94 last year at this time. Back in the 1980s it would be 200 murders by now. The dysfunctional tenth of the District's black community must be brought under control 'by any means necessary.' This pollution must be eliminated from our environment. Whites have tolerated blacks killing blacks in record numbers over the past twenty years, but black-on-white murders will probably get more attention. The real estate in Georgetown, right, is more expensive than in Anacostia and so are the people.

Just as racism targeted black communities to locate pollution sites, black crime now appears to be targeting white communities. So environmental racism cuts both ways? Black crime has moved from black neighborhoods to The National Mall and Georgetown. Just as white racism has been associated with all whites by blacks, extraterritorial murder hurts all blacks in DC because, as the white captain who was reprimanded and reassigned said, "It is unusual for blacks to be in Georgetown." Even tough it was 2 in the morning when a recent murder occurred, now blacks will be profiled even more as criminal suspects when walking around in white communities (even if they live there). Like it already wasn't bad enough. Where are the Black Panthers and the Nation of Islam on this problem? Probably just like the ACLU and mainstream environmental groups in the white community, more concerned with defensing their own.
Police Chief Declares DC Crime Emergency
Murders in Other Cities
Posted by Norris McDonald at 10:02 AM