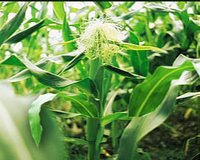 Making corn liquor has clean air and greenhouse gas emission consequences. Most ethanol plants will probably be fired by coal, thus requiring the same scrubbers, thermal oxidizers and baghouses used in regular electricity plants. Lime will probably be used to control sulfur (SO2) emissions (about 4,000 tons per yer in the example below). Significant Carbon Dioxide (CO2) emissions will also be released from these plants. Of course, it is estimated that corn captures as much CO2 as is released when ethanol is burned in automobiles. There is no such quid pro quo with gasoline.

According to Robert McIlvane in "The Road to Ethanol" in Pollution Engineering magazine, "we will need 1,400 ethanol plants at 50 million gallons per year (mgy) each to provide half of our transportation fuels. There are currently 95 plants operating in the U.S. with 40 under construction and 150 plants in the planning stage. We need 56,000 megawatts (MW) of new coal-fired small boilers (1,400 plants at 40 MW each) just to supply these plants with the energy they need." (More)
Posted by Norris McDonald at 10:33 AM