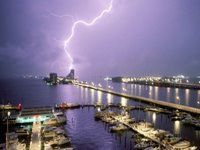 Heat waves and storms have people dying and electricity distribution systems failing all over the country, particularly in New York, Calfornia and Missouri. There have been blackouts in California in Los Angeles, Sacramento, San Diego and San Francisco. Temperatures in Cali have reached up to 115 degrees and PG&E is drawing on all available power. Almost 100,000 people have been without power in the Bay Area during localized outages. California should listen to AAEA and start building new nuclear power plants now.

Consolidated Edison in New York says it does not know why up to 100,000 people were without power for a week in Queens. Although it started with severe storms, preliminary analyses point to weakened wiring as a culprit. We know that the entire New York transmission and distrubution system needs to be upgraded and expanded. Politicians in New York need to get their heads out of the sand and inact appropriate measures to assure reliable electricity for the citizens of the state.

Nine people have died in St. Louis, Missouri due to storms and about 600,000 Ameren customers in Missouri and Illinois have gone days without power. The outages are exacerbating illnesses because people cannot turn on their air conditioners as temperatures reach up to 100 degrees.
Posted by Norris McDonald at 10:06 AM