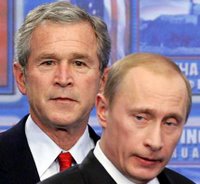 Presidents Bush and Putin have agreed to allow spent fission fuel from other countries that originated in the U.S. to be stored and possibly reprocessed in Russia. The U.S. and Russia have a long history of cooperation on blending uranium from nuclear warheads to use in fission power plants. It is called the Megatons-to-Megawatts Program and utilizes a mixed oxide (MOX) process for new fuel fabrication. The U.S. is currently planning to build a huge MOX fabrication facility in South Carolina.

This agreement appears to be a way for the U.S. to get Russia to work with us to discourage or prevent Iran from developing uranium enrichment capabilities for its nuclear weapons program. Commercial fuel is about 4 percent pure U-235 and weapons-grade is 95 percent pure. Russia is currently helping Iran build a commercial fission plant. An enrichment plant is very different from a fission plant, but fission by-products and uranium from a commercial plant can be taken to an enrichment plant to make a bomb warhead.

This current agreement, announced at the G-8 Summit in Russia, does not allow storage of spent nuclear waste from U.S. power plants. Current plans for U.S. waste include transporting it to Yucca Mountain in Nevada. Of course, the Global Nuclear Energy Partnership (GNEP) will expand cooperation among countries currently utilizing commercial fission power and those seeking to get electricity from fission plants. GNEP allows the status quo fission plant countries to maintain control over fission fuel, thus reducing the posibility for nuclear weapons proliferation.
Posted by Norris McDonald at 12:28 PM