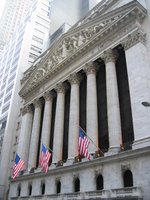 According to an article in The New York Times, Wall Street is an exclusive club for white men. Black brokers have filed a racial discrimination lawsuit against Merrill Lynch charging that it has systemically limited opportunities, denied promotions and retaliated against complainers. The plaintiffs want a large monetary award and court-ordered initiatives to increase diversity. Blacks now account for 2.3 percent of Merrill's brokers and broker trainees.

The nation’s three biggest brokerage firms — Merrill, Morgan Stanley and Citigroup — have paid out $400 million to settle sex-discrimination suits filed by women in the past 10 years.

The Equal Employment Opportunity Commission sued Merrill in 1976 because it had engaged in “a pattern and practice” of discrimination. Merrill, the nation's largest brokerage firm, signed a consent decree with the EEOC that one of every 15 broker trainees it hired would be black. After failing to meet the hiring goals agreed to in the 1980’s the agreement eventually expired with the goals unmet.

AAEA board member Derry Bigby (Wake Forest B.A, UNC-Chapel Hill MBA) shares his experience with a major brokerage firm: "I know the frustrations of Wall Street first hand. I remember being the only black in my class at - - - - in New York. I also remember being herded in the direction of low commission retail business, when they knew that is far from what I expected. For instance, I went out and acquired the business of a major pension fund and instead of being praised and rewarded, I was penalized for not following the rules of, if you're black, stay back."
Posted by Norris McDonald at 9:40 PM