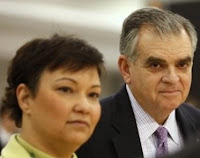 Environmental Protection Agency Administrator Lisa Jackson and U.S. Department of Transportation Secretary Ray LaHood testified before the House Transportation and Infrastructure Committee on April 29 on implementation of the American Recovery and Reinvestment Act (ARRA). Administrator Jackson and Secretary LaHood discussed how the EPA and DOT are working to get tens of billions of dollars in recovery act funding out the door to create jobs, protect human health and the environment, and boost local economies.
When Administrator Jackson was asked about the Green Project Reserve (GPR), her answer made AAEA staff immediately think about how that component of the ARRA could be combined with our Environmental Justice Allowance Reserve (EJAR). AAEA's EJAR addresses the racial 'Hot Spots' issue in cap-and-trade programs. These allowances would come from a special reserve, similar to the current Acid Rain Program Renewable Energy and Conservation Reserve, when the initial allowance allocation is made under a cap-and-trade program. They would be awarded to utilities, automakers and others that undertake environmental justice practices and programs designed to mitigate or prevent price shocks, increase the installation of pollution control equipment, promote community education and enhance health-related activities. Utilities and automakers could choose to work with organizations and businesses that conduct environmental justice activities related to climate change mitigation and reductions in emissions of sulfur dioxide, nitrogen oxides and mercury.