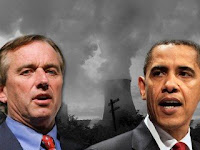 UPDATE: Josh Nelson Says ABC News Account Is Misleading
No he diN'T. We sincerely hope this is a joke, lie or mistaken quote. But there are published reports on this day before Earth Day that Robert Kennedy, Jr. is calling President Obama an 'indentured servant' to the coal industry for supporting clean coal. Now although we do not believe there is any such thing as clean coal, we do support President Obama's position on utilizing coal as cleanly as is reasonably possible. The president's Secretary of Energy clearly described this policy last week.

And let us say that if he said it, it is just a slick way of calling President Obama a slave. Such racial imagery is unnecessary. Environmental extremists have a tendency to go overboard in criticizing people they disagree with in many cases. We knew the day would come when looney tune enviros would turn on the president for taking reasonable positions on certain energy sources. You should be ashamed of yourself Bobby J for disrespecting our president in this way. If you have to disagree, you do not have to be ugly and disagreeable. We implore you to apologize for this racialist statement. And never go back into this plantation mentality again. (ABC News, photo courtesy ABC News)
Posted by Norris McDonald at 7:49 PM