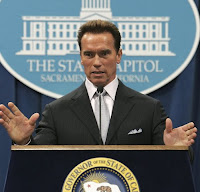 California Governor Arnold Schwarzenegger, left, vetoed two renewable energy bills that were passed in September that would require the state's utilities to use renewable energy, like solar and wind power, for a third of the power they sell by 2020. Governor Schwarzenegger vetoed the bills because he believes his alternative plan is better and because he objected to provisions of one of the bills (AB 1404) that would limit the amount of renewable power utilities could buy from other states, saying they were "protectionist" and would be costly. AAEA supported AB 1404 and worked with other groups in California for its passage. Several renewable energy developers and utilities supported the bills, as did consumer, environmental and union groups.

Governor Schwarzenegger appears to be taking the same route as the Obama administration, which is drafting climate change regulation at EPA because it appears that Congress will not be passing such legislation. The California Republican governor has ordered the state's Air Resources Board to draft regulations requiring the state's utilities to use renewables for a third of their retail power by 2020.

Unlike the vetoed legislation, the new rules won't limit the amount of renewable power California utilities can buy from out-of-state facilities that are too far away to deliver the electricity in real time. Mr. Schwarzenegger agreed with some industry groups, utility regulators and the state's grid operator that restricting out-of-state renewable energy purchases would make it nearly impossible for utilities to meet the 2020 deadline. AAEA disagrees with this assessment because it can and probaby will lead to purchasing CO2 offsets from out of state instead of making the requirement retrofits and development project in-state to meet the required reductions. Methodologies, environmental friendly construction and retrofits reduce smog-forming gases in addition to CO2, which would be particularly beneficial to minority communities suffering from disproportionately higher levels of pollution.

Despite California's aggressive goals, in-state development of new renewable-energy generation and transmission facilities has been slow, primarily due to approval delays at state and federal agencies. (WSJ, 10/12/09)
Posted by Norris McDonald at 11:33 AM