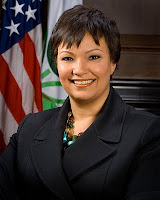 Administrator Lisa Perez Jackson, left, a New Orleans native, is scheduled to make her first visit to the city as EPA Administrator on Tuesday and Wednesday, November 17 and 18.

On Tuesday, November 17, Administrator Jackson will speak at the EPA’s National Brownfields Conference at the Morial Convention Center. Her remarks will be open press.

Administrator Lisa Perez Jackson grew up in Ponchartrain Park in New Orleans’ Ninth Ward. The Administrator went to St. Gabriel the Archangel grammar school and St. Mary’s Dominican High School, where she was valedictorian of the class of ‘79. She also graduated with a degree in Chemical Engineering from Tulane University. Her mother and several members of her family were displaced from the city when their house was destroyed during Hurricane Katrina.
Posted by Norris McDonald at 12:41 PM