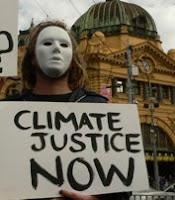 This past weekend, 60,000 to 100,000 protesters demonstrated at the Bella Center in Copenhagen, Denmark, site of the United Nations climate change conference to replace the 1997 Kyoto Protocol before it expires in 2012. Protest participants outside the Bella Center, the convention center where delegates and observers from nearly 200 nations are gathered to seek a consensus, included a broad coalition of hundreds of environmental groups, human rights campaigners, climate activists, anticapitalists and freelance protesters from dozens of countries. Anticapitalists? AAEA supports capitalism. We also support cap and trade.

There were minor incidences of violence at the mostly peaceful march. We are a bit confused though. Most American environmental justice groups oppose cap and trade. Yet it appears that the international environmental movement is using the slogan 'climate justice' to support passage of a climate treaty based on cap and trade.
Posted by Norris McDonald at 8:51 AM