Violence in Copenhagen: Chicago 1968 All Over Again?

The images of rioting young people and police bashing heads outside the Bella Center in Copenhagen reminded me of the rioting outside the International Amphitheatre at the 1968 Democratic National Convention in Chicago. Tear gas and the stench of burning cars wafted out of the environment around the climate change summit just as in Chicago. Rioters threatened to storm the summit just as in Chicago. The results were about the same too. Both went down in crushing defeats. The Democratic National Convention debacle was 42 years ago. President Obama was in the second grade in 1968. It's a little ironic that he is from Chicago (later in life) and Copenhagen mirrored the DNC event. 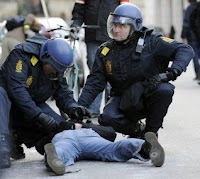 Some 3,000 people demonstrated and more than 500 people were arrested at the first Saturday of the conference. Police said the street violence was the worst in a decade. Hundreds of police officers in riot gear used tear gas to disperse the crowd. I didn't particularly like the images I saw. I thought the rioting in Copenhagen was counterproductive, just as it was in Chicago. One gave us President Richard Nixon and the Copenhagen climate summit failed to adequately address the most important environmental issue facing our planet today.
Posted by Norris McDonald at 8:26 PM