AAEA Is The Canary in the Coal Mine 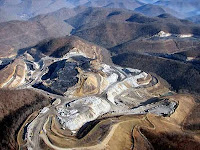 AAEA opposes mountaintop removal, pictured at left, because it destroys streams and threatens human health. AAEA supports African American ownership of coal mines (even in a global warming world), but using the less efficient, less safe and more labor intensive mine shaft method of extracting coal. Blacks do not own any coal mines in the United States even though 50 percent of the nation's electricity is produced with coal.

West Virginia's senior senator Robert Byrd has it wrong in his belief that: 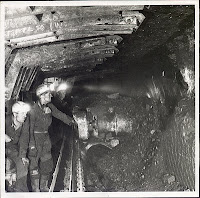 We need more employment in West Virginia, not less. We also need African American ownership of coal mines. And even though shaft mining, pictured at right, is more dangerous, numerous workers are willing to take that chance. We should have the strictest safety standards for coal mine workers and all coal mining should be shaft mining. We need to ban mountaintop coal mining that pollutes streams and threatens human health and AAEA will be working actively to do so. EPA should reject the Spruce No. 1 mine in Logan County, West Virginia. Mingo Logan Mining Company, a subsidiary of Arch Coal, which owns the mine, should be required to shift to shaft mining and should recruit a 49 percent minority partner to extract the coal.

A recent study by 12 environmental scientists, headed by the University of Maryland, supports AAEA's position that the scientific evidence shows that mountaintop coal mining destroys streams and threatens human health. The scientific team also concludes that the evidence is so strong the government should stop granting new permits for mountaintop removal. (The Bellinghead Herald, 1/7/10)
Posted by Norris McDonald at 2:16 PM