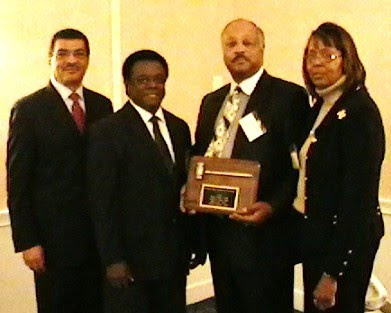 President Obama's State of the Union speech is not the only big event in Washington, D.C. today. The National Black Chamber of Commerce (NBCC) had two very important events near The White House today: The first was a press conference at the National Press Club to announce their "Legacy Project," which is an initiative to improve the value of local Black chambers of commerce throughout the United States. The second was a luncheon at the St. Regis Hotel to celebrate their outgoing board chairman Mike Little.

The press conference in the Zenger Room of the National Press Club in Washington, DC was conducted by new NBCC Board of Directors Chairwoman Sherrie Gilchrist and NBCC President/CEO Harry C. Alford. They and other officers of the organization explained the mission and details regarding their new Legacy Project. Sherrie Gilchrist stated:

“The economy is in the tank and our communities are suffering. We must seize the time and use it wisely by providing technical assistance to our affiliates so that they may better serve their communities and improve the economic status, through business growth and jobs. Thus we have devised this comprehensive approach.”

According to Harry Alford:

"There are 140 affiliated chapters of the NBCC. Some are great; some are good and others need much improvement. We can’t have social clubs representing out interests. Each chapter must be trained and prepared to provide assistance in business growth and job creation."

When the National organization was founded in 1993, the US Census Bureau reported 300,000 Black owned businesses doing $33 billion in sales. Today, the Bureau reports over 1 million Black owned businesses doing more than $88 billion in sales. That growth is the fastest growing segment of the US economy and the NBCC believes there is a correlation between the two.

The NBCC will publish training manuals, hold workshops, and will rate local chapters on a 5 star rating system. It should be the goal of each chapter to have a 5 Star rating which would indicate credibility and professionalism in its management. The national organization will have 10 formal regions and will begin implementing the program immediately with committee formation and a specific Strategic Plan.
The luncheon to honor outgoing chairman Mike Little was inspirational. Mr. Little served as chair of the NBCC for the last six years. The current board chairwoman, president and members of the board of directors all praised Little's local, national and international leadership. Mr. Little led trade missions to Nairobi, Kenya, Canary Island, Accra, Ghana and held conventions all over the United States. Bill Kovacs, Environmental Director for the U.S. Chamber of Commerce also praised Mr. Little for his leadership.
Posted by Norris McDonald at 4:51 PM