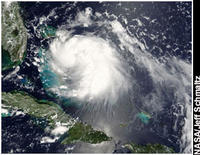 Louisiana Governor Kathleen Blanco's refusal to authorize the federal government to take control delayed the response of the federal government in providing food, water and security to poor stranded blacks in and at the Superdome and at the Convention Center in New Orleans in the first days after the Hurricane Katrina crisis. President Bush was being generous when he acknowledged that the initial response and results were 'unacceptable.' Any anger, blame and ultimate responsibility for the early inadequate response should be placed at the feet of Gov Blanco.

The day after President Bush's visit to New Orleans, ALL of the people at those sites were provided with food and water, airlifted and arrangements were made for temporary shelter. The current effort to help blacks in New Orleans and all hurricane victims is now in full force and American might is being applied to the situation. All of the volunteers, government workers, the media and everyone else contributing to the evacuation and reclamation of the Gulf Coast region should be commended for their work.

Much is left to be done. America now has a toxic city that must be cleaned up and rebuilt. Hundreds of thousands of people will need assistance to get their lives back. It is now time for all Americans to work together to solve the problems created by Hurricane Katrina in Mississippi, Louisiana and Alabama. We are sure America will rise to the challenge. What do you think?
Posted by Norris McDonald at 10:07 PM