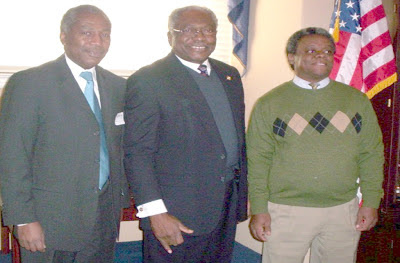 African American Environmentalist Association President Norris McDonald met with James Clyburn (D-SC) in his Capitol Building office to discuss energy and environmental issues facing the 110th Congress. Congressman Clyburn is the House Majority Whip and he has an office on the second floor of the Capitol Building in addition to his regular legislative office in the Rayburn House Office Building. McDonald also met with Clyburn's Chief of Staff, Yelberton R. Watkins. The meeting was arranged by John Rosentall, who is the Coordinator for the Environmental Justice in America 2007 Conference scheduled for March 29-31, 2007. AAEA is a cosponsor of the conference.
While on Capitol Hill McDonald and Rosenthall visited the offices of Al Wynn (D-MD), Alcee Hastings (D-FL) and Hilda Solis (D-CA). The conference and pending environmental justice legislation were discussed. All of the bills are available at the Environmental Justice Coalition. One last stop was made to attend the EPA Budget Briefing by U.S. EPA Administrator Stephen Johnson. (More)
Picture: John Rosenthall, Congressman James Clyburn, & Norris McDonald
Posted by Norris McDonald at 9:34 PM