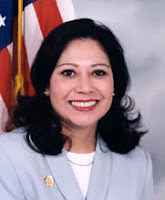 A General Acounting Office (GAO) report requested jointly by Reps. Hilda Solis, right, and John Dingell, left, shows the public cost of cleaning up leaking underground storage tanks is $12 billion and that these leaks are negatively impacting public health and our water supplies. In its response to the GAO state survey, California noted that there are approximately 14,800 leaks in its "cleanup backlog," 80 percent of which have affected groundwater at levels requiring cleanup. 9,000 of these leaks (approximately 60 percent) contain MTBE at levels that require cleanup.
The Trust Fund had a surplus of $2.57 billion in 2006 that is expected to grow to $3.0 billion at the end of Fiscal Year 2008. The tax on gasoline brought in $197 million in 2006 and an additional $99 million was collected in interest on the amounts in the Trust Fund. President Bush only requested $72.4 million in his FY 2008 budget for cleanup, which is approximately 2.82 percent of the total amount in the Trust Fund. A Press Release by Reps. Dingell and Solis provides more information.
Congresswoman Hilda Solis (D-CA) has also introduced an environmental justice bill to codify Executive Order 12898 and to require the Administrator of the Environmental Protection Agency to fully implement the recommendations of the Inspector General of the Agency.
Posted by Norris McDonald at 12:15 PM