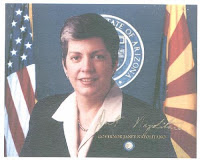 Arizona, New Mexico, Washington, and Oregon have joined with California in an agreement to reduce their greenhouse gas emissions. They will establish reduction targets in six months and design a regional cap and trade system within a year after that. They will have to get approval from thier respective legislatures. California has already passed legislation. Northesastern states have already established a Regional Greenhouse Gas Initiative (RGGI).
These states need to support the aggressive construction of nuclear power plants if they are serious about their carbon dioxide reduction programs. We suspect they are not serious, particularly Nevada -- note their absence from this group. Nevada is probably afraid they would have to endorse Yucca Mountain as the repository (and recycling center if AAEA had its way) for nuclear waste. In 2003, California, Oregon and Washington created the West Coast Global Warming Initiative, and in 2006, Arizona and New Mexico launched the Southwest Climate Change Initiative. So maybe we are wrong about Nevada. (New Mexico Business Weekly)
The agreement is called the Western Regional Climate Action Initiative. The governors include: Janet Napolitano (AZ- Upper Right), Bill Richardson (NM), Chris Gregoire (WA), Ted Kulongoski (OR) and of course Arnold Schwarzenegger (CA). (Wash Post)
Posted by Norris McDonald at 11:06 AM