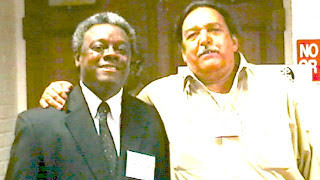 By Norris McDonald: It was good to see Richard Moore at The State of Environmental Justice 2007 Conference at the Howard University Law School. Twenty-five years ago Richard Moore helped organize the First People of Color Environmental Leadership Summit. He was also instrumental in getting President Clinton to issue Presidential Executive Order 12898 on Environmental Justice. Although we are both a quarter century older since that first national environmental justice conference, it is always good to see this veteran environmental justice activist. And Richard still has that 'Latino Cool' thing working for him.
Richard was the founder and Director of the Bobby Garcia Memorial Clinic in Albuquerque, a founding member of the Southwest Organizing Project (SWOP), and a founding member of the Southwest Network for Environmental and Economic Justice (SNEEJ). Richard is presently the coordinator of the Southwest Network, a regional organization which comprises over 80 community based grassroots organizations working in communities of color in six southwestern states and Mexico.
Posted by Norris McDonald at 6:40 AM