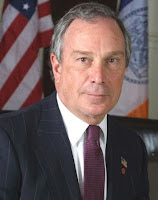 New York Mayor Michael Bloomberg does not put much value on political party labels but he is serious about global warming because he supports nuclear power. Well, he has not been a big supporter but he has not opposed it either. And he has Indian Point nuclear power plant in his backyard and it is the favorite whipping boy of every politician within 50 miles of the facility. None of the naysayers have a clue as to how to replace IP's 2,000 megawatts (enough for 2 million homes) of emission-free-produced electricity. Support for nuclear power is AAEA's litmus test for determining seriousness about the threat of global warming.

Here is what Mayor Bloomberg has said about the mystical power source:

“There are a lot of people who want to shut down the nuclear plant, but they have never offered any realistic alternatives – even as they at the same time want to fight global warming. You just can’t have it both ways!" (NEI)

Mayor Bloomberg has also issued a plan for improving environmental and energy matters in New York. A few highlights: 1) create a financing authority that would assure the completion of major projects like the Second Avenue subway, 2) New authorities to push for improved energy efficiency in new buildings and for the replacement of energy-guzzling power plants, 3) construction of platforms over railyards and highways to create land for housing, 4) open 290 schoolyards as playgrounds, 5) eliminate city sales taxes on energy-efficient hybrid vehicles, 6) increase the number of bike paths, 7) cultivate mussels to suck pollution out of the rivers.

Mayor Bloomberg also has an Energy Policy Task Force, established in July 2003, which is headed by the New York City Economic Develop Corporation and has 16 members including leading energy experts in the private, public, and not-for-profit sectors, as well as representatives of environmental and community groups.

Finally, Mayor Bloomberg is promoting 'congestion pricing' to increase the price for vehicles to enter Manhattan. AAEA does not support using price to achieve environmental and energy efficiencies.

ALL CANDIDATES
Be Aware
Posted by Norris McDonald at 7:39 AM