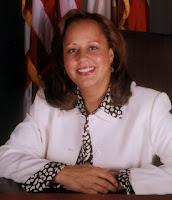 Assemblywoman Laura Richardson, left, won the Democratic Party primary for the 37th Congressional District of California on June 27 and the general election should be a walk over. Richardson defeated State Sen. Jenny Oropeza, 37.8 percent to 31.1, respectively. Richardson is the assistant speaker pro tem of the Assembly and will continue to work in that capacity until she is sworn into Congress, which will likely be early September. (Afro American Newspaper)
Posted by Norris McDonald at 6:54 PM