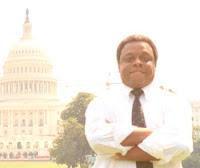 By Norris McDonald. Stop killing the sparrows and starlings at Metro stations. Metro is just being lazy. Admittedly the bird droppings should not be spread all over the Metro transit system but slaughtering the birds during off hours is a brutal practice that should be stopped immediately. Modify that contract killers agreement to include a thorough washing where the birds congregate.
And I have to play the race card: is this practice just in Black areas? It is being reported that the stations were in DC and stations in Prince George's County. We will have to cry fowl (foul) if environmenal injustice is being practiced in addition to senseless bird slaughter. I love sparrows and starlings. My backyard bird feeder welcomes all types of perching birds all day long.
This is just one more instance of government insensitivity when it comes to fowl. They wanted to shoot the Mute Swans in the Chesapeake Bay. They want to shoot the Canadian Geese at Langston Golf Course. Now poisoning at Metro stations. This pattern and practice of human brutality, notwithstanding the great service my frat brother Jim Perdue provides, must stop. Although we have human concerns, unlike PETA's obsession with Michael Vick, we will spend some time defending our defsnseless feathered friends. Stop the madness. Get a water hose. (Wash Post)
Posted by Norris McDonald at 10:09 AM