PRESIDENT'S CORNER: Supreme Court Decision Did Not Change My Environment 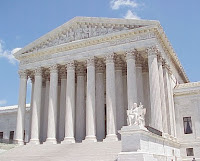 By Norris McDonald. I live in the richest majority black county in the United States. As blacks moved to Prince George's County whites moved out, or at least to Bowie, Maryland. Bowie wanted to secede from Prince George's County and join with lighter Anne Arundel County. So what does this have to do with the recent Supreme Court decision limiting the use of race in assigning students to public schools? Well my son's schools in PG County have been and are segregated. There were no whites (except the 3 or 4 poor ones that could not get out) in my son's elementary, middle or high school. And I don't care. Neither do most of the other blacks in Prince George's County.
I desegregated a high school in South Carolina in 1967 and they did have more resources: new books, better athletic bus, a tennis court, etc. I noticed the distinct differences because my father was principal of the black school (K-12). I was number one on the tennis team my senior year and once a white parent hit his kid in the head for losing to me). I was denied playing on private courts when there weren't enough at the high school. I remember once seeing a black dog walking on a court that I could not play on. The coach explained after we left town why our team did not play on the private courts. It was because I was there and the owner did not want me on his court. Good thing too because I was (and am) very good and would have beaten anyone they put in front of me. But I digress. People should associate to their comfort level. Whites should not be forced to be around blacks. Hell, that's why few whites visit any black community. Fine with me.
Now liberal blacks are moaning and groaning about resegregation and undermining of the 1954 Brown v. Board of Education. They worry that their kids will not have the opportunity to sit next to white kids. Sitting next to a white kid at school never helped put any information in my head. I had to do the work. Free association is fine with me. And if whites want to leave when we move in, regardless of social and economic class, God bless 'em. And good riddance. I want to be comfortable. And evidently so do they. That is why there is a black community in virtually every city in the United States. And as we say at AAEA: "The African American community is as American as apple pie."
One of the main reasons AAEA was formed was because of the institutional racism in the mainstream environmental movement. I could ramble on but they got it right over at The BlackInformant via Booker Rising. And of course LaShawn Barber never holds back on the right views.
Posted by Norris McDonald at 10:20 PM