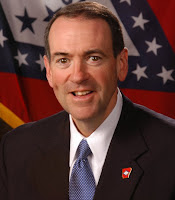 We are glad that Mike Huckabee did well in the Iowa straw poll by coming in second place. We like Huckabee's conservative values and his efficient way of communicating his views. This world view is applied to energy and environmental issues in The Wall Street Journal (81907). And we like his Fair Tax proposal to replace the federal income tax with a sales tax of either 24% or 30%.
Climate change: "We have allowed it to become a political issue rather than an issue about being responsible inhabitants of earth....Anything we do that does in fact curb and contain CO2 emissions is a good thing...My first thought is that a tax is not the ideal way to try to change behaviors....[and] this whole idea of carbon credits, it seems to me a bit like buying indulgences...I think every citizen can take some steps. flex fuel car, fluorescents. I'm from an agricultural state (Arkansas) so I tend to like biofuels. But I think the answer's going to be a combination of many sources: solar, nuclear, hydrogen, hydrogen cells and wind. The best thing the government could do is eliminate any type of penalties on productivity and innovation.
Posted by Norris McDonald at 11:37 AM