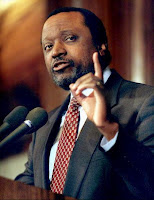 ALL CANDIDATES
Alan Keyes is running for president as a Republican. Alan Keyes is the purest conservative candidate in the Republican Party running for president. He is also Black so he gets no traction because the GOP is still much more hostile to Blacks than the mule party. In fact, it appears that there is an effort to exclude him from the debates. But we digress.
Alan Keyes is a global warming skeptic when it comes to whether it is caused by humans. He also believes that government should not be the regulator of any global climate change mitigation program. He states:

"I share the conviction of many that the earth is the Lord's and that we as God's stewards must care for its well being. However, translating this weighty obligation into good public policy is no simple task. We should avoid the temptation of assuming, without further ado, that if it is our duty to care about something, we must necessarily put that something under government control."

Keyes goes on to say, "Even if global warming turns out to be a real problem, the Kyoto Protocol would be the wrong solution." He continues, "On the specific issue of global warming, I am impressed by a variety of empirical evidence that suggests we have little or nothing to fear...I conclude that the climate system is probably much less "sensitive" to "greenhouse forcing" than the climate models assume."

We could find no position from Alan Keyes on nuclear power, but we will assume that he is pronuclear, mostly because it is a pure solution to global warming without the need for direct government management. Thus, although he is a global warming skeptic, he is good on the issue because (we assume) he supports nuclear power. Nuclear power, combined with plug-in fuel cell hybrid vehicles, are the best short term solutions to mitigating global warming and climate change.
Posted by Norris McDonald at 4:53 PM