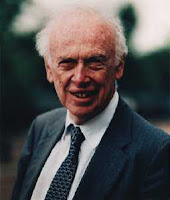 Supremacist scientist James Watson, left, has made news by sharing his view that Blacks are not as smart as Whites. WOW. Now this is news. We are shocked that a supremacist DNA scientist would think something like this. Simply shocked. And was what he said so bad? He said, he "hopes that various races have equal intelligence, [but] people who have to deal with black employees find this is not true." Maybe the man has struck on something here. Is this why there is employment discrimination? Hell this ugly old man could lead the environmental movement. His messiah (Darwin Monkey) is pictured at right.

But don't the vast majority of environmental and evolutionary indicators actually show that Whites are intellectually superior? Don't Darwin's "Origin of Species: by Means of Natural Selection, or The Preservation of Favoured Races in the Struggle for Life" and survival of the fittest point to superiority in species as a positive attribute? A quality to be desired? A useful survival mechanism? Of course, Hitler took this concept to its ultimate human destination. Adolf was an ardent environmentalist too. He telegraphed his intentions in Mein Kampf and hailed the superiority of the German people among all humans (See also Nation & Race). And the Nazi scientists were second to none. Regardless, this notion of superiority is extremely important to some people. (Wash Post)
Posted by Norris McDonald at 8:54 PM