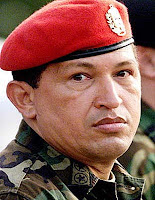 Hugo Chavez hates President Bush and is working very hard to become a dictator in Venezuela. Venezuelans recently rebuffed his referendum to gain even more power. It will not stop him. Young people have already started protesting against the abuses of his governance. White and Black American liberals have embraced Chavez as a sort of hero even in the face of his abuses at home. Former congressman Joe Kennedy gets cheap fuel oil from Chavez through Citgo and Danny Glover, Cornell West, Harry Belafonte and British model Naomi Campbell have met privately with him. Well Kennedy got a $100 million fuel oil deal and apparently the others got nothing but lip service. Par for the energy course. America gets about 13% of its oil from Venezuela.
So we have a suggestion for Venezuelan President Hugo Chavez. Sell Citgo to an African American entrepreneur. AAEA can suggest excellent buyers for you. Blacks do not own any energy infrastructure in the United States. The big energy companies simply are not inclined to include African Americans as equity partners. So since it appears that Chavez enjoys goosing America through providing cheaper fuel oil through Joe Kennedy's Citizen's Energy, maybe he would get a bigger kick out of empowering an American minority entrepreneur. Divest now President Chavez. What's good for the goose is good for the gander.
Posted by Norris McDonald at 3:40 PM

Email ThisBlogThis!Share to TwitterShare to FacebookShare to Pinterest
Labels: Venezuela