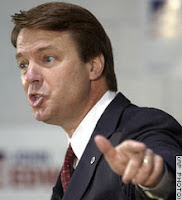 Senator John Edwards released the following statement on the Lieberman-Warner bill (S. 2191) that was approved Dec 5 by the Senate Committee on the Environment and Public Works:

"Addressing global warming is one of the great moral tests of our generation, and it's time for bold action and leadership to address this crisis that threatens the globe. While I'm glad to see that global warming legislation is finally moving in the Senate, unfortunately the Lieberman-Warner bill doesn't go far enough to address the crisis of global warming. We cannot be limited in our approach by the armies of lobbyists from big oil companies and other special interests. This bill gives away pollution permits to industry for free - a massive corporate windfall - instead of doing what is right and selling them so that we can use these resources to invest in clean energy research, create a new economy of green jobs, and help regular families and business go green."
"I believe it is our moral obligation to do everything climate science says is needed to save our planet. Ending global warming won't be easy, but it is time to ask Americans to be patriotic about something other than war. If we start taking the bold action I have recommended, we can emerge from the crisis of global warming with an economy built on clean, renewable energy and more than one million new jobs." [His campaign sent it and we published it]
Posted by Norris McDonald at 4:04 PM