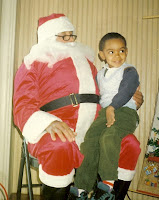 PRESIDENT'S CORNER. By Norris McDonald. What does Christmas mean to you? Maybe for an atheist it means the end of the fourth quarter and hopes for our capitalist system to get needed stimulation. Maybe for a pagan it is sorrow for the disturbance of the many Christmas trees. Maybe for the Christian it is the recognition of the birth of Jesus Christ (even though the date is not right). Maybe for the Muslim it is an interesting festival time. Maybe for the Buddhist it is being one with the snowflake or the falling leaf. Maybe for the Hebrew it means still waiting. Maybe for the Hindu it means nothing at all. Ah but for the four year old, it clearly means Santa Claus, Christmas trees and presents.
I tease my 15 year old son now about the great entertainment it provided for me to see his excitement about Santa. The milk and cookies gone in the morning that Santa drank and ate. My son (5 yrs old at the time-1997) is sitting on the lap of Walter Tibbs at the Frederick Douglass house in Highland Beach south of Annapolis, Maryland in the upper left picture. He was first in line and asserted his good behavior and belief that he deserved an X-Man action figure. Ah Christmas. Rest, relaxation and a good time for reflection.
Posted by Norris McDonald at 10:57 AM