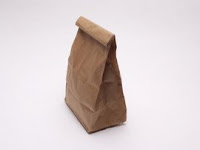 The brown paper bag test was a ritual once practiced by certain African-American sororities and fraternities who discriminated against people who were "too black". That is, these groups would not let anyone into the sorority or fraternity whose skin tone was darker than a paper bag. Spike Lee's film "School Daze" satirizes this practice. [source]

Do whites use the brown paper bag test too? Do they favor lighter blacks? Think Colin Powell, Halle Berry, Barack Obama, Prince, Michael Jackson (both sides though), you get the idea. Are blacks darker than a brown paper bag discriminated against more than blacks lighter than a brown paper bag? There are notable exceptions: Condoleezza Rice, Vernon Jordan, Denzel Washington, Wesley Snipes, James Clyburn and Michael Jackson.
The 'one-drop' rule and hair texture also supplement the brown paper bag test in ranking people. Historically, to assure the separation of the races, it was established in law that if a person had 'one drop' of black blood then one could not be considered to be white. Note that Barack Obama is still considered to be 'black.' Pencil and comb tests have been used to determine one's acceptance into certain places and the nature of one's being. The pencil involved inserting a pencil in a person's hair to determine if the hair was kinky enough for the pencil to get stuck. If the pencil remained stuck in a person's hair, the person was 'black.' Similarly if the comb got stuck then the person was considered to be 'black.'
Posted by Norris McDonald at 10:08 AM