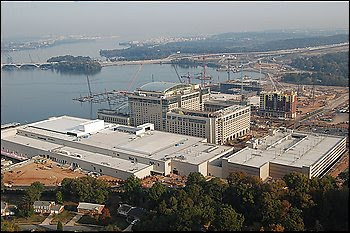 Technical Inquiry: Why is sanitary sewage being pumped up hill at least 200 feet high and several miles away to a pumping station when Blue Plains Sewage Treatment Plant is on a level plain about a mile away? Jurisdiction?  Maryland versus DC water permitting?

"Although WSSC has proposed to upgrade the station’s generators to address power outages, a second pumping station should be constructed to handle sewage generated in the Henson Creek basin east of Route 210 that will feed into the main Piscataway treatment plant. This would allow the Broad Creek Pumping Station to efficiently pump the anticipated increases in volume from National Harbor and new development west of 210." Gazette.Net

Sanitary sewer overflows occur in all older Eastern cities every times it rains. Every time it rains the excrement from toilets in the Washington Metropolitan Area ends up going directly into the Anacostia and Potomac Rivers. It is the designed Combined Sewer Overflow (CSO) system. The same occurs in Baltimore, Philadelphia, New York and elsewhere. Sanitary pipes also run parallel to creeks and rivers in many areas to serve as backup systems when the pipes leak.