AAEA and The Anthrax Incident in Washington, DC 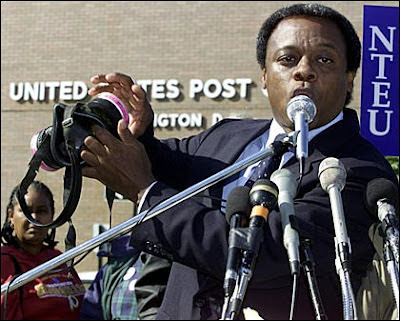 It appears that suicide victim Bruce E. Ivins was behind the anthrax attack on Washington, D.C's main post office. It is worth revisiting the 2001 situation because, although it is not being reported now, the postal workers at Brentwood felt abused by the reactions of the responsible policy decision-makers at the time. Most of the postal workers at Brentwood are African American.

They felt that the response to their anthrax contamination was handled differently from the response at the Hart Senate Office Building. Brentwood remained open after anthrax was discovered and the Hart Building was immediately evacuated and closed after an anthrax letter was found in Senator Tom Daschle's office. Brentwood was later closed and employees worked out of a building nearby.

Bruce Ivins, 62, is being described in the press as the prime suspect in the anthrax attacks. He was a biological-weapons specialist at the U.S. Army Medical Research Institute of Infectious Diseases at the Fort Detrick lab in Frederick, Maryland. He graduated from the University of Cincinnati with a Ph.D. in microbiology. He was described by his brother as being an egotist who thought he was omnipotent and "like a god." This idiot god evidently murdered Thomas Morris, Joseph Curseen and three other people with anthrax.

AAEA organized a rally to support the plight of the postal workers at the Brentwood postal facility, now known as the Joseph Curseen, Jr. and Thomas Morris, Jr. Processing & Distribution Center. The rally was held on October 30, 2001 in front of the closed Brentwood building to show support for the postal workers. The rally was cosponsored by EPA Victims Against Racial Discrimination, Friends of the Earth, Gray Panthers, Urban Protectors, EPA-Nat'l Treasury Employee’s Union, Chapter 280, Women Like Us (Brenda Richardson), Donald Temple Law Offices, and the DC Statehood Green Party. The rally was covered by numerous news outlets.

Posted by Norris McDonald at 4:44 PM