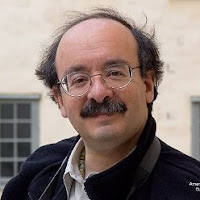 Physicist Amory B. Lovins, right, is Cofounder, Chairman, and Chief Scientist of Rocky Mountain Institute and he has issued a new report entitled, "The Nuclear Illusion," which concludes that:
"The case for nuclear power to protect the climate and enhance security is purely rhetorical and cannot withstand analytic scrutiny. The supposed nuclear revival is a carefully manufactured illusion that seeks to become a self-fulfilling prophecy, yet it cannot actually occur in a market economy, as many energy-industry leaders privately acknowledge."

Lovins mentions four people who support nuclear power and refutes their positions. He states that no green groups share their view and then Lovins dismisses AAEA in the first footnote in the report by stating:

"No environmental group of any consequence—only industry front groups—shares their views."

Well AAEA is NOT an industry front group. We have been around for 23 years and have a rich history of environmental work. The quote is aimed directly at us because we are the only environmental group in the United States that supports nuclear power. He at least recognizes the four other people who support nuclear power, but these individuals, like Lovins, ignore AAEA's nuclear power work too.

It is not unusual that Lovins would ignore us because the environmental movement is one of the most segregated and racist sectors of American society. AAEA has also documented the elite racism of the environmental movement. So we are not surprised by Lovins rendering us invisible. Clearly, many self-worshipping scientists emulate the example of James Watson and they are a dime a dozen. Maybe it is this feeling of superiority that explains why most environmental groups do not hire blacks in policy positions or hire just one to cover their general discrimination.

Of course, Mr. Lovins must not think much of Congresswoman Eddie Bernice Johnson or the Congressional Black Caucus either. She is including us on her Science and Technology Braintrust at the CBC's annual conference this year. Lovins must think that Congresswoman Johnson has bad judgment. Moreover, AAEA's president organized the first energy forum in 1981 for the CBC for the late Congressman Mickey Leland. We could go on with our accomplishments but it will not matter to people like Lovins. We clearly are of no consequence to him and his ilk, but we provide a very valuable service to society in general and the African American community, which is excluded and ignored by the environmental movement. It is accurate to say that we are 'little known,' but saying we are of 'no consequence' appears to us to be an expression of one's opinion about the Black community.
Posted by Norris McDonald at 11:48 AM