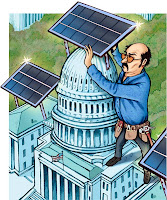 When Congress returns after labor day for a hyper three week session, energy legislation will be on the front burner. Although they could not pass a bill before the August recess, and some Republicans even stayed in town calling for members to return to pass a bill, Congress will probably merge the offshore oil drilling and green jobs components of the two bills described below that failed to pass.
A bipartisan group of 10 senators ("Gang of Ten") are cosponsoring New Energy Reform Act of 2008 in hopes of breaking the Senate deadlock on energy legislation. The legislation includes limited offshore drilling with increased investment in new energy technologies. A portion of the funding for renewables would come from taking back tax breaks from the oil industry. The bill also sets a goal of fueling 85 percent of the country's automobiles with alternatives to oil within 20 years. (More)
The Renewable Energy and Job Creation Act of 2008 (H.R. 6049) amends the Internal Revenue Code to provide tax incentives for energy production and conservation, to extend expiring tax provisions, and to extend tax benefits to individual and business taxpayers. The bill was sponsored by House Ways & Means Committee Chairman Charles Rangel and was passed by the House on May 21, 2008, but failed cloture votes in the Senate on June 10 and June 17. (More)
Posted by Norris McDonald at 8:40 AM