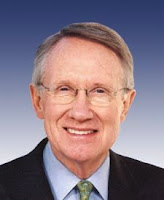 Senate Majority Leader Harry Reid, the Center for American Progress Action Fund and the University of Nevada, Las Vegas (UNLV) organized and held the National Clean Energy Summit this week at the Cox Pavilion at UNLV. The conference with politicians and energy experts is pushing for a future without a dependence on oil. Reid calls Nevada "the Saudi Arabia of renewable energy," and it has 57 operating renewable energy projects, which heat and cool 200,000 homes.