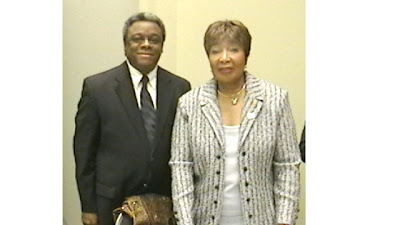 Congresswoman Eddie Bernice Johnson knows how to put on a forum. She sponsored her 16th forum at the 2008 Annual Congressional Black Caucus Legislative Conference at the Walter E. Washington Convention Center in Washington, D.C. But don't think that she just goes through the motions. Clearly she orchestrated this event like a maestro. Her staff operated like a finely tuned precision team. They produced art. Thank you. See videos below:
VIDEOS
Congresswoman Johnson met us for Breakfast at 7 a.m. at the Grand Cafe at the Grand Hyatt hotel. She got to know each panelist a little by participating in engaging conversation. This was the first conference for some of the panelists and one would have thought that it was the congresswoman's too based on her enthusiam. The buffet breakfast was excellent too. And to top this off she provided exquisite chaffeured transportation for the panelists to the convention center. She made us feel like stars.

The theme of the Science and Technology Braintrust was "Today's Technology for Tomorrow's Environment." Congresswoman's Bernice Johnson's statement:

Thank you for attending the 2008 Congressional Black Caucus Foundation's Science and Technology Braintrust. As a senior member on the House Committee on Science & Technology, I am dedicated to diversifying our domestic workforce in fields such as science, technology, engineering and mathematics (STEM).

Your participation is key for a successful Braintrust. I believe that today's discussions will spark imaginations and leave each of us with a new viewpoint.

The panelists included (in order of presentation): 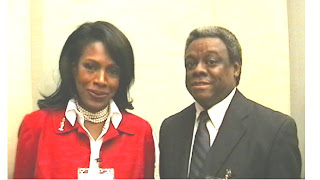 They were bright eyed, enthusiastic and asked interesting questions. Sheryl Lee Ralph provided an inspirational message to them and they responded accordingly. They rushed the stage after the presentation to meet her. She was very accomdating and patiently engaged each and every student who approached her. It is also interesting that Ms. Ralph costarred in "The Distinguished Gentleman" with actor Eddie Murphy, which was based in Washington, D.C. with Mr. Murphy playing a congressman.
The forum was well attended with a standing room only packed house. After the forum, the congresswoman's militarily efficient staff herded us back to our transportation at the front of the convention center and we were wisked to The Willard Hotel for a fabulous lunch sponsored by Texas Instruments and a presentation on, "Dropouts, Diplomas, and Dollars-U.S. High Schools and the Nation's Economy," by former West Virginia Governor Bob Wise.
All-in-all it was a wonderful event. I attended my first CBC conference in 1979 and I organized the first Energy Braintrust for the late Congressman Mickey Leland. But this was far and away the best event I have ever participated in at a CBC conference. Thank you Congresswoman Johnson.
I am pictured with Congresswoman Eddie Bernice Jones, top, and actress Sheryl Lee Ralph, bottom.
Posted by Norris McDonald at 7:13 PM