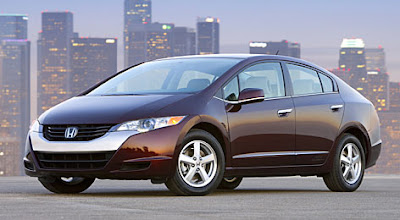 Finally, someone is producing the car we have been salivating over for a decade. The Honda FCX Clarity is a hydrogen fuel-cell lithium ion plug in electric car. Hydrogen gas from the car's fuel tank and oxygen in the air pass through membranes in the fuel cell, resulting in an electrochemical reaction that generates electricity to run the motor and produces water vapor as exhaust. A backup lithium-ion battery pack helps when more power is needed than the fuel cell is producing. About 200 go to consumers in the next three years. Most will be leased for $600 a month to Southern Californians who have other cars and live near one of three 24-hour public hydrogen stations. Each Clarity costs Honda some $200,000 to manufacture.
The test car's 61 miles per kilogram of hydrogen in suburban use equated to 62 miles per gallon of gasoline. Washington, D.C.'s only public hydrogen pump, a Shell station, charged $8.18 per kg. So, $8.18 for 61 miles in Clarity, vs. about $9.35 in a 24-mpg, four-cylinder Accord. Honda's developing a home-fill unit. It would hook to a residential natural gas line and produce hydrogen for your fuel-cell car, heat for your home's water and electricity for your house. Honda won't predict timing or price. Honda FCX Clarity:
• What? Limited-production, midsize, front-wheel-drive, four-door, four-passenger sedan powered by electricity from a hydrogen fuel cell backed up by lithium-ion battery pack.
• When? First was delivered July 25 in Southern California, where public hydrogen filling stations make a hydrogen car feasible.
• Where? Built at Tochigi, Japan.
• Why? To field-test production hydrogen cars in customers' hands.
• How much? Leased for $600 a month for three years.
• How many? About 200 the next three years, most in the U.S., a few in Japan.
• How potent? Electric motor is rated 134 horsepower, 189 pounds-feet of torque. Lithium-ion battery pack is rated 288 volts.
• What's missing? Power seats, sunroof, leather, auto on/off headlights. Otherwise loaded.
• How big? Four inches shorter than Honda Accord, about 200 lbs. heavier, otherwise similar. Clarity is 190.3 inches long, 72.7 in. wide, 57.8 in. tall on a 110.2-in. wheelbase. Weighs 3,582 lbs. Passenger volume is listed as 100.8 cubic feet.
Trunk: 13.1 cubic feet with under-floor storage well. Carries 700 pounds of people, cargo.
• How thirsty? Rated 77 miles per kilogram of hydrogen in town, 67 on the highway, 72 in combined driving. That equates to 79/68/74 mpg of gasoline, according to Honda.
Regular-production test car's trip computer showed 61 mpkg in suburban driving.
Tank holds 4.1 kg hydrogen compressed at 5,000 lbs. per square inch.
• Overall: System whines annoyingly. (USA TODAY, 9/5/08)
Posted by Norris McDonald at 11:04 PM