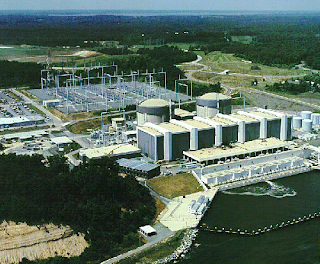 As much as we support building a new nuclear power plant at Calvert Cliffs, we have to realistically conclude that the project is dead because of Warren Buffet's recently announced plan to buy Constellation. We say this for several reasons:

1) Constellation's failed attempt to merge with Florida Power and Light a couple years ago.
2) Warren Buffet will not spend the money [plant would cost him as much as the company].
3) Electricite de France (EdF) outbid Buffet for Constellation but was still rejected by Constellation.
4) EdF is buying British Energy for $23.2 billion.
5) The Wall Street meltdown and Congress' refusal to bail them out.
EdF is in partnership with Constellation to build a new type of nuclear power plant called an EPR (Evolutionary Power Reactor). The design has yet to be approved by the Nuclear Regulatory Commission (NRC). The cancellation of this plant would be a huge problem for the nuclear industry. This is also a very serious situation for future electricity reliability for our nation's capital and the region.
This situation definitely puts more pressure on Dominion to add a second reactor to its plans to build a new nuclear power plant at its North Anna facility in Louisa County, Virginia. Dominion has an application pending for NRC design certification approval of the Economic Simplified Boiling Water Reactor(s) it wants to build at the site.
Posted by Norris McDonald at 5:06 PM