Some environmental groups are complaining about the possibility of Nationals Park selling its naming rights to ExxonMobil. Nationals Park is the first LEED-certified green stadium in the U.S.A., in part because of its proximity to a Metro 'Navy Yard' subway station. Does this mean the naming rights should be restricted to a company approved by the environmental movement, one of the most segregated sectors of American society in a majority African American city? The movement should consider integrating itself first before seeking to dictate about city imagery. Moreover, the environmental movement is a $6 billion a year industry and if they don't want ExxonMobil, or any other company they disapprove of, to get the naming rights, then they should put up the money or shut up. These groups arrogantly want to preach to the Washington Nationals about what they should do instead of 'walking the walk.' 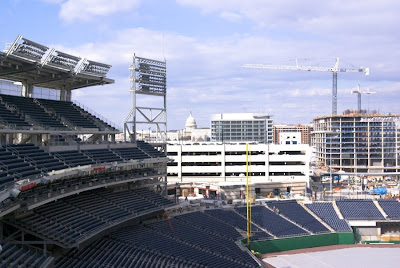 Family is the principal owner of the Washington Nationals baseball team, the District of Columbia government put up the $611 million to build Nationals Park. So there might be some compromise about naming rights that would give the team naming rights to the luxury suites area and the city naming rights to the stadium. We believe it should be named Robert F. Kennedy Memorial Park. Now if the city wants to use the green group logic on this, we would love for Nationals Park to be renamed African American Environmentalist Association Park. We doubt this would be acceptable by the old greens because we do not purely adhere to old school green NIMBY BANANA * dogma. The Nationals might not want to comment on this, but we surely will. The Nationals should tell the greens to put up or shut on on this issue if they are criticized about their decision.

* Not In My Back Yard Build Absolutely Nothing Anywhere Near Anything
Posted by Norris McDonald at 1:02 PM