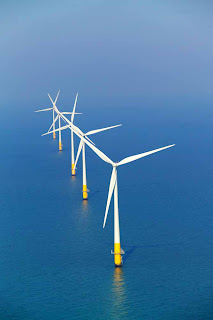 The New Jersey Board of Public Utilities (NJ BPU) today announced that it has chosen Garden State Offshore Energy (GSOE), a joint venture of PSEG Renewable Generation and Deepwater Wind, as the preferred developer of a 350-megawatt wind farm off the coast of New Jersey [see also Rhode Island decision last week]. It will be located 16 to 20 miles from the NJ coast and will have little impact on the environment and ocean views (map). As the preferred developer, GSOE will proceed with evaluation of the project's environmental impacts and wind resources quality as well as begin the permitting process at both the state and federal levels. The wind farm could begin generating energy in 2012 with the entire project operational in 2013. The New Jersey Energy Master Plan (EMP) calls for 20 percent of the state's New Jersey's energy to come from renewable sources by 2020, a major portion of which is envisioned to be from offshore wind.
This decision marks the state's ongoing commitment to aggressively encourage the expansion and creation of clean energy solutions to meet the state's energy needs. The foundations, turbines and towers are planned to be assembled on land and will be transported to the wind farm site via large-scale barges. Assuming a suitable site can be found, turbine assembly and port facilities are expected to be located in New Jersey and create local green jobs.

The decision was the result of a process run by the BPU's Office of Clean Energy. The Garden State Energy proposal was chosen from among five submitted to New Jersey regulators for evaluation. GSOE will also receive a $4 million grant from the state of New Jersey, 10 percent of which will be received upfront to offset a portion of the costs of the studies. The remainder will be received upon commercial operations. The completion of the project is dependent on receipt of all required permits, ongoing analysis of environmental impacts, wind quality studies, energy markets, financing and other conditions. The decision to proceed, as well as final location, design and construction schedules, could be affected by these factors. 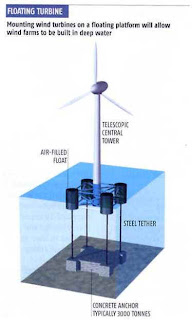 Generation
is a subsidiary of PSEG Global and is part of the PSEG family of companies headquartered in Newark, NJ. PSEG is a diversified energy company (NYSE:PEG) and parent of PSE&G, a regulated utility with over 100 years of delivering safe, reliable energy to New Jersey consumers. PSEG's other renewable projects include:

. a $105 million solar loan program (run by PSE&G).
. the formation of a joint venture, Energy Storage and Power, which is promoting compressed
air energy storage.
. The launching of Solar Solutions, which seeks to build and own larger scale solar installations
in the Northeast.
. Operation of biomass facility in New Hampshire.

Deepwater Wind was established to develop utility-scale offshore wind projects in the northeastern part of the United States. The company's major investors are D.E. Shaw & Co., a global investment and technology firm with deep experience in the energy sector and First Wind, a major developer of onshore wind projects in the United States.
Posted by Norris McDonald at 12:44 PM