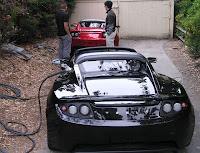 It is being reported that Tesla Motors if delaying the production of its battery-powered car. It is laying off staff and shaking up management. This is a real blow to electric vehicle penetration into the American car market. The Tesla Roadster was to cost $60,000 and was going to debut the car in 2009, but is delaying the introduction to 2011. The car is named for Serbian electricity genius Nikola Tesla. The vehicle is being produced by PayPal co-founder Elon Musk.
Posted by Norris McDonald at 7:14 PM