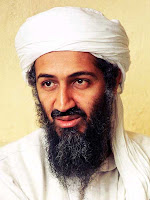 Al Qaeda is confused. Osama bin Laden, right, through one of his minions, called the leader of the most powerful nation on Earth a 'House Negro.' Their confusion comes from the fact that President-Elect Obama does not just 'work' in the White House, he is in charge of the White House. Note the distinction. A House Negro was a slave working in the plantation house. Today it is used to perjoratively refer to a perceived 'Uncle Tom' employee. President-Elect Obama is America's top boss. How could being the leader of the free world ever be confused with being a House Negro? Of course, if you are operating from inside a cave, it might be hard to appreciate former Senator Obama's accomplishment.
We organic field negroes at AAEA are also apoplectic that Al Qaeda's second-in-command, Ayman al-Zawahiri, would invoke the name of the honorable El-Hajj Malik El-Shabazz (Malcolm X) in a futile attempt to blunt Muslim enthusiasm for President-Elect Obama. Zawahiri's ruse is pathetic. Malcolm X would consider Barack Obama to be a revolutionary for justice and the fulfilment of his and Dr. Martin Luther King Jr.'s dreams. 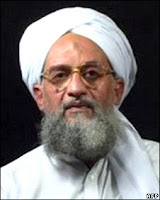 Pimp daddy Ayman al-Zawahiri, above, should also know that American Blacks are familiar with every permutation of 'divide-and-conquer (D&C).' Whether it is al Qaeda promoting a 21st Century version D&C, or others seeking to undermine our new leader, know that we have seen and experienced every conceivable way D&C is utilized. So calling the president-elect a "house slave" who would do the bidding of his white masters will not distract us. For the terrorist cowards who flew defenseless airline passengers, including innocent women and children, into our buildings and into the ground are evil incarnate. And we invite the cave dwelling Ayman al-Zawahiri to come to Anacostia or South Chicago or Compton or the South Bronx and call our great leader a 'house negro.'
Naomi94 Recites It All In the Video Below
Posted by Norris McDonald at 9:21 AM