PRESIDENT'S CORNER: The Death Of An Owl 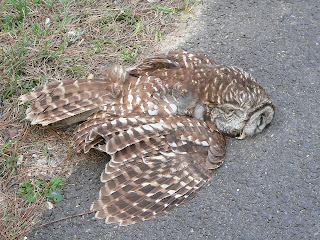 By Norris McDonald
I was taking my daily walk to the store to pick up my newspapers and noticed that the tall weeds had been cut along both sides of the sidewalk. I thought it looked very nice and since it was a globally warmed November day, the grasshoppers were just hopping everywhere. I noticed the same owl that seemed to have staked out the two fields across the street from each other and he flew towards the street right into a car. He bounced off the windshield and fell into the street. Evidently it is not that unusual though because another Blog, Journals of an Amateur Naturalist, gives a good explanation for the phenomenon.
He was still just in the road enough so that other cars could run over him so I decided to help before that happened. I thought that even though he would probably never fly again, that I might still save his life. I picked up a rolled newspaper and was going to push him out of the street, but just as I took two steps towards him, he flew up. Unfortunately, he flew right into the path of an SUV and was hit dead on at about 45 miles per hour. This time he was dead. He was in the other lane and I waited for the traffic to clear and placed his dead body over in the brush off the side of the road.
I wondered how such a thing could happen so quickly on such a beautiful day. This Barred Owl, pictured above right, was a magnificient bird having a typical day. And it was over in a flash. Yet tragedy seemed to be added to injury by the second hit. I realize now that if I could have helped the bird, he might have survived. Yet my trying to help got him or her killed. It was just a horrible reminder that sometimes life is just not fair and death could come at any moment.
Posted by Norris McDonald at 2:12 PM