AAEA President Norris McDonald has interacted with all of the recent EPA administrators. These interactions have ranged from meetings at the administrator's headquarters office in Washington, D.C. to activities out in the field. The meetings have ranged from the White House to national parks and have covered a wide range of environmental issues. So now that EPA is about to get a new administrator, we decided to take a look back at some of the other admistrator to assess their performance and their interactions with us.

William Reilly, left, was EPA administrator from 1988 to 1992. He received a standing ovation from environmental justice activists from all over the country at his final meeting with them at EPA headquarters in 1992. He also created the EPA Office of Environmental Justice. Reilly received good reviews from the traditional environmental movement. Bill Reilly is a Harvard Law grad and served in the Army in the 1960's. He was president of the Conservation Foundation and the World Wildlife Fund. Reilly is currently affiliated with the Texas Pacific Group, a private equity firm based in Ft. Worth, Texas and he was a key player in the TXU leveraged buyout. AAEA salutes William K. Reilly for his excellent service as EPA administrator. 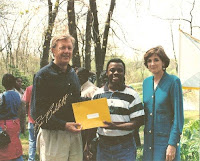 Carol Browner served as EPA administrator during Bill Clinton's entire eight year term. She is highly regarded by the mainstream environmental movement but was severely limited because environmental issues were not a priority of the Clinton adminstration. Although former Vice President Al Gore is applauded for his work since leaving the vice presidency, that adminstration is not remembered for its environmental initiatives. She has been selected by President-Elect Obama to be his Energy Czar, which is a hybrid that will somehow incorporate some of the functions of DOE, EPA and CEQ without needing confirmation from the U.S. Senate. Unfortunately, the Browner administration is stained by the Marsha Coleman-Adebayo v Browner episode whereby EPA was convicted of discrimination and fined $600,000 by a court. Congress, through the work of Dr. Adebayo passed a national law, the No FEAR Act of 2002, to address the situation throughout the federal government. AAEA is just disappointed that Browner completely ignors this episode. McDonald is pictured above right with former Department of the Interior Secretary Bruce Babbitt and Carol Browner in Kenilworth Park recognizing him for his work on the Anacostia River. 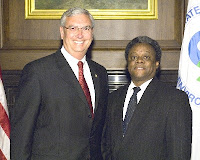 Stephen Johnson, left, was a career EPA scientist who became EPA administrator under George W. Bush. Administrator Johnson gave us the courtesy of a meeting in his headquarters office in Washington, D.C. with just himself, an assistant and our president when he became administrator. The meeting covered a range of international, national, regional and local environmental and energy issues. Johnson is not highly regarded by the mainstream environmental movement. Under his watch, EPA sought to genearalize environmental justice by excluding race as a principle factor in its consideration at the agency. Sadly, Johnson allowed Dr. Coleman-Adebayo to be fired at the end of his term. Hopefully this will be corrected by the next administrator.
Posted by Norris McDonald at 11:35 AM