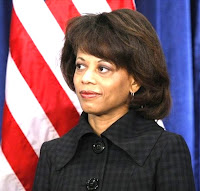 President-Elect Barack Obama has designated Melody Barnes, right, to be the Director of the Domestic Policy Council (DPC). She received her law degree from the University of Michigan and her bachelor's degree from the University of North Carolina at Chapel Hill. Barnes served as chief counsel for Senator Edward M. Kennedy on the Senate Judiciary Committee from 1995 to 2003.
The Domestic Policy Council coordinates the domestic policy-making process in the White House and offers policy advice to the President. The DPC also works to ensure that domestic policy initiatives are coordinated and consistent throughout federal agencies. Finally, the DPC monitors the implementation of domestic policy, and represents the President's priorities to other branches of government. The Domestic Policy Council’s formal membership includes the cabinet Secretaries and Administrators of federal agencies that affect the issues addressed by the DPC.
Posted by Norris McDonald at 10:00 PM