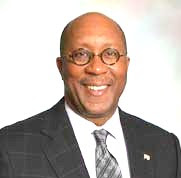 President-Elect Barack Obama has nominated former Dallas Mayor Ron Kirk to be his U.S. Trade Representative. He is currently a partner with the Houston-based law firm Vinson and Elkins and was one of the four highest paid lobbyists for Energy Future Holdings Corporation, the group created by Kohlberg Kravis Roberts, TPG Capital and Goldman Sachs to acquire TXU. [Wiki] He is a 1976 graduate of Austin College and received his J.D. from the University of Texas in 1979. Ron Kirk, 54 was mayor of Dallas from 1995 to 2001.
The Office of the United States Trade Representative (USTR) is an agency of over 200 people, a highly committed group of professionals who have decades of specialized experience in trade issues and regions of the world. They negotiate directly with foreign governments to create trade agreements, resolve disputes and participate in global trade policy organizations. They also meet with governments, business groups, legislators and public interest groups to gather input on trade issues and explain the president’s trade policy positions. The agency was founded in 1962 and has offices in Washington, Geneva and Brussels.
Posted by Norris McDonald at 4:41 PM