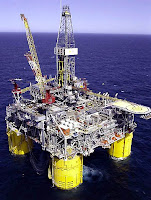 The Obama administration should re-impose a ban on expanded offshore drilling that was lifted last year by the Bush administration and allowed to lapse by Congress. Any plan to open tracts off the Atlantic and Pacific coasts where drilling has been prohibited for decades is a bad plan. Congress should also re-impose the ban.
America's east and west coasts are too valuable to be risked for oil development. The coasts of Florida should also be protected into perpetuity. We should also restrict foreign countries from threatening our coasts with such offshore oil development.
Posted by Norris McDonald at 7:21 AM