It never should have been built in that location because it is too close to people. The BRESCO waste-to-energy incinerator in South Baltimore, which burns city garbage, has been allowed to operate on an expired air pollution permit for about two years. Now some environmental groups have filed a lawsuit in the Baltimore Circuit Court to force the Maryland Department of the Environment to set new emission limits for the trash incinerator. The effort is being led by the Environmental Integrity Project. AAEA supports their action and would be happy to join the lawsuit. 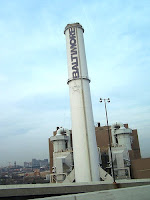 The state drafted, but has not issued, a new permit for the incinerator, which is operated by Wheelabrator Technologies. The permit would let the facility emit more pollution than the law allows. Baltimore already has some of the worse air pollution of any city in America. Having a garbage burner downtown simply does not make sense because it adds to the already burdened nonattainment area. Baltimore's air is categorized as 'severe' according the U.S. Environmental Protection Agency. MDE expects to issue a new permit within the next two weeks for the waste-to-energy incinerator . (BaltimoreSun.com, 1/22/09)
Posted by Norris McDonald at 4:25 PM