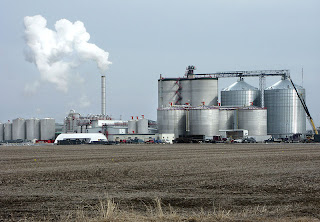 By Scott W. Golla
and Richard Grzanka
Pollution Engineering
In the effort to reduce the world’s dependence on fossil fuels, there has been a major push towards alternatives. Ethanol has been at the forefront of this movement because it reduces greenhouse gas emissions from automobiles and its production has a positive net energy balance. The homegrown fuel also reduces the need for imported oil from sometimes unfriendly and unreliable supplier nations.
The Energy Policy Act of 2005 required the blending of 7.5 billion gallons per year of renewable fuels with gasoline by 2012. According to the Renewable Fuels Association, that threshold should be met sometime this summer, on a capacity basis. Ethanol plants are expanding and being developed at a significant rate in North America and throughout the world. There are currently over 70 ethanol production plants under construction in the United States alone. Washington is talking about a goal of 25 percent of our transportation fuel supply from renewable biofuels by 2025. This ethanol development has expanded to nearly all regions of the country; suffice it to say there is a boom going on the ethanol industry and it is expected to continue for some time.
Ethanol is produced by fermenting and distilling starch, creating a 200-proof alcohol suitable for combustion in a vehicle. When processing corn, only 70 percent of the kernel is made into ethanol; the remaining fats, proteins, fiber, oils and minerals are referred to as distiller’s grain (DG). If a production plant is not very proximate to dairy operations or other significant livestock feeding needs, it will have to dry the DG in order to prevent spoilage during transport to more distant regional markets. Operating restrictions, penalties and fines, as well as community pressures, are forcing many plants to strive for the lowest possible emission levels from their dryers, enabling future capacity expansions. Since air permits are granted on a facility-wide basis, when developing, designing and permitting ethanol production facilities, selecting the most appropriate process equipment as well as air pollution control equipment is critical.
Some unique DG dryer designs are steam-heated or compressed air-based, but the vast majority of installed dryers are heated with natural gas. Regardless of the dryer type, volatile organic compounds (VOCs), odors and aerosols are emitted from the drying activity. By far the most commonly installed technology for this critical emissions source is some form of efficient thermal oxidation. Most of the major ethanol design firms incorporate thermal oxidation of this exhaust stream into their plant designs, and most state air permitting agencies require it. (More)
Posted by Norris McDonald at 11:28 AM