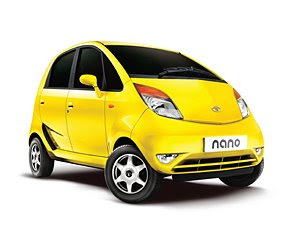 Would black Americans purchase the Nano, right, being sold in India right now? Blacks do not usually buy really small cars and 'style' is a bit more important for this population. For instance, not many blacks purchase the Toyota Prius. But what about manufacturing? The Nano sounds like just what the doctor ordered for many low and middle income blacks (that is if they just want to drive and not 'profile.' Maybe some black entrepreneurs could partner with Tata Motors to produce this car in the United States. Why does it have to be racial you ask? Because blacks do not currently own any automobile manufacturing, or almost any other type of manufacturing, facilities in the United States. Just as blacks do not own any energy production infrastructure. THAT'S WHY.
Tata Motors' $2,000 Nano has no air conditioning, stereo or air bags and a single windshield wiper. But it puts the dream of car ownership within reach for India's middle and working-classes. The Nano's lightweight, two-cylinder engine musters about 35 horsepower. It tops out at just over 60 mph. Today, only eight of every 1,000 adult Indians own a car -- compared with about 770 per 1,000 American adults. According to Tata Motors, the Nano gets about 50 miles per gallon and is 12 percent less polluting than a typical motorcycle. (Wash Post, 3/24/09))
Posted by Norris McDonald at 9:16 AM